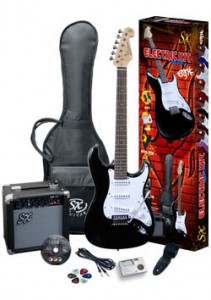 David and I have been talking about this for a while and, due to the fact that he actually practiced during the Christmas holidays, David is now the proud owner of an SX Electric Guitar and Amp.  It is a black Stratocaster (I think) replica.

He took it to his lesson on Tuesday but his teacher did not have an amp setup in the music room so he couldn’t play it.  They have agreed to alternate, one week acoustic one week electric and he will take his own amp down on the electric weeks.

I am probably not that popular at home after showing David what the overdrive button does on his amp!  I have to admit, it does sound good.  This also means that, when he plays at school for things like assembly, he will be able to plug in and be heard by everyone rather than the front row or having a mic held in front of his guitar.